Aberarwr is a small, happy village where the weather is always fine and where everyone smiles broadly. The central focus of the village is Aberarwr Primary School where generations of children have been taught. It is a very small school but there's always something happening there - fairs, concerts, meetings, night classes, committees, eisteddfodau, EVERYTHING! And although small, rural schools are closing regularly, Aberarwr School has stood its ground and goes from strength to strength.

Poli Puw is the Headteacher and she holds everything together in the village. She is the chairperson, president, secretary, treasurer and organiser of all that takes place in the school and she is the only teacher; and she wouldn't have it any other way. She enjoys every minute. She works very closely with the Cook at the school, Anti Dwndwns, the Lollipop man, Mr Gordon and the caretaker, Mr Gittins.

Anti Dwndwns is a jolly character full of love and cwtchus and she puts her heart and soul into everything she cooks for the children. She is also strong and it doesn't pay to cross her.

Mr Gordon is very popular with the children. He keeps them safe and they love his magic tricks.

The school is always as clean as a whistle because Mr Gittins is a hardworking caretaker, but fussy and VERY FAST! He can clean everywhere in a jiffy and if anyone has a message to deliver, Mr Gittins is the man. He can take it faster than an email!

There is only one thing that has caused a dark cloud over this happy school. Some years ago, in the middle of the night one of the pupils disappeared, a little boy called Wil and to this day everyone remembers him and hopes that one day he will return.

But there's another cloud on its way. Work needs to be carried out on the school. The building is old and its age is beginning to tell on the structure. Money is needed by the school but from where? Well, the Christmas fair will be a good start. It will be necessary to make a huge effort this year - plenty of food, games, crafts, sports and masses of enthusiasm to spread the word.

But who could know that the darkest cloud of all was about to surround the village? Casandra Bigfain , the richest (and nastiest) woman in Wales is “bored”. And when Casandra is bored awful things happen. She and her little servant Wiblyn, who is totally subservient and follows her everywhere, are looking for a project. She has houses and flats and palaces and boats all over the world but she fancies having a place where she can have peace and quiet – somewhere quiet, an old building she put her own stamp on it, or even demolish… somewhere like the old school in Aberarwr.

Casandra finds her way to Aberarwr and Wiblyn is sent to “investigate” so that his mistress can set her cunning plan into action. She treats Wiblyn very badly, but he takes it all because he has nowhere to go. Although he tries being nasty he doesn't succeed. This annoys Casandra immensely.

She hears that the school is in some financial difficulty, so Casandra pays Poli Puw a visit so as to charm her and offer to invest many thousands of pounds in the building. But her true intention is to steal the school from the village and change it into a luxury country home for herself and she will do whatever it takes.

But Anti Dwndwns, Mr Gordon and Mr Gittins can smell a rat because their senses are much sharper than ours. They are stronger than ours and faster than ours and they are FAR more cunning than us. They are … THE HEROES! They have been around since time immemorial. Mr Gordon is the Magician Gwydion from the Mabinogi, Anti Dwn Dwns is Saint Dwynwen and Mr Gittins is the runner Guto Nyth Bran and their special powers – magic, the power of love and exceptional speed – have kept everyone in Aberarw safe along the years. But no-one knows this…

Through their incredible gifts and their ability to give others confidence and power along with Poli Puw and Bobi they succeed in winning, conquering Casandra, keeping the school, having the most successful Christmas Fair ever and securing a prosperous future for Aberarwr.

Wiblyn also turns his back on his mistress after she had mistreated him over the years. He and Bobi become big friends and you know the little boy who went missing all those years ago? Yes, it was Wiblyn and it was Casandra who stole him but he is now back where he belongs and he's going to live with Bobi and Poli.

Aberarw is now safe thanks to the HEROES! 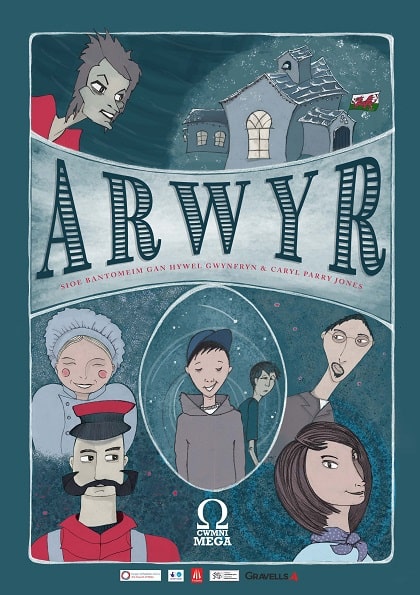